A jargon-free, easy-to-learn SAS base course that is tailor-made for students with no prior knowledge of SAS.

How to Import Text Files into SAS

Text files are a common file format to use when importing or exporting data from one data source for another. When importing text files from other data sources or databases, there are many variations in the data structure and delimiters that one can come across.

This article aims to address some of the more common challenges that arise when attempting to import different variations of text files into SAS. A few different tips and methods are also provided along the way.

Before we continue, make sure you have access to SAS Studio. It's free! 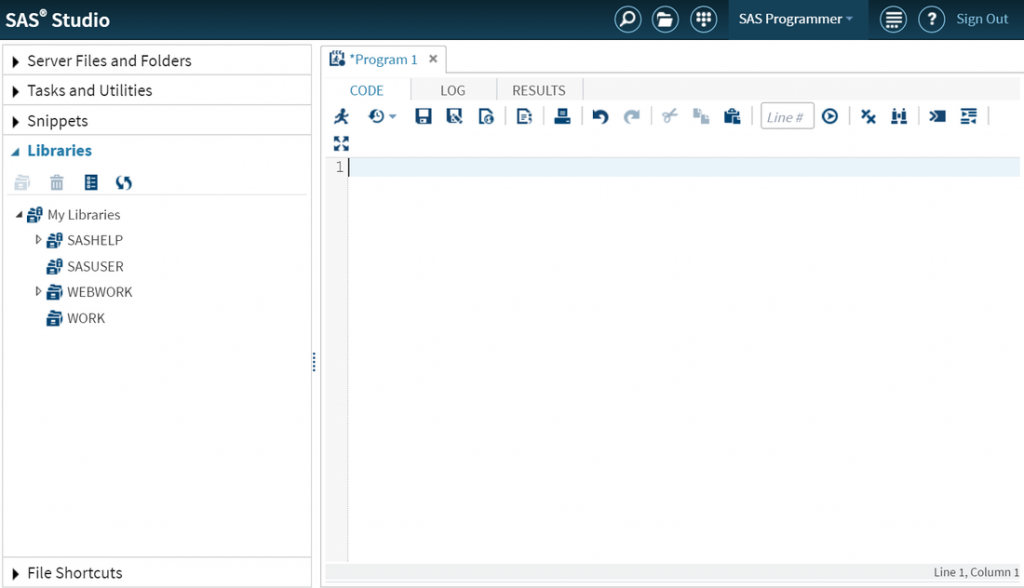 The examples used in this article are based on the text files listed below. The text files are derived from the SASHELP datasets including CARS and ORSALES datasets:

Before running any of the examples below, you will need to replace the path ‘/home/your_username/SASCrunch’ with a directory that you have read/write access to in your environment.

If you are using SAS OnDemand for Academics, you must first upload the files to the SAS server.

Please visit here for instruction if you are not sure how to do this.

With a tab-delimited text file, the variables (columns) are separated by a tab and the files typically end with a “.txt” extension.

In this example, the input file is the cars_tab.txt file. This is a text file based on the SASHELP.CARS dataset.

The first part you need following the PROC IMPORT statement is the datafile argument. The datafile argument is required so that SAS knows where the file you would like to import is stored and what the name of that file is. Inside the quotation marks following the datafile argument, you need to add the complete path, including the filename and file extension. Be sure to replace ‘/home/your_username/SASCrunch’ with the correct directory on your machine or environment where cars_tab.txt is saved. In this example, “/home/your_username/SASCrunch” is the path, “cars_tab” is the filename, and “.txt” is the file extension.

To import tab-delimited text files, both the DBMS and DELIMITER options will need to be used. The DBMS value used for this case is DLM. The DLM value tells SAS that you would like to specify a custom delimiter for the dataset.

After closing off the PROC IMPORT statement with a semi-colon, a second option, DELIMITER is added. The value of DELIMITER for a tab-delimited file is ‘09’x, which is the hexadecimal representation of a TAB on an ASCII platform.

Using these parameters, the following code will import the tab-delimited cars_tab.txt file and output a SAS dataset in WORK called CARS_TAB:

After running the above code, you will notice something is a bit off with the output dataset: 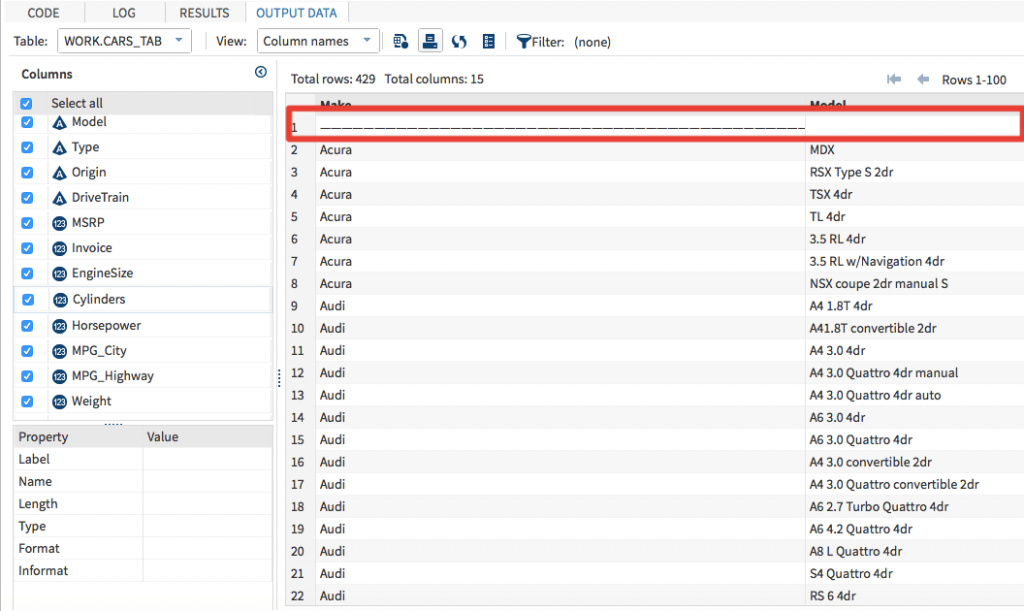 If you were to open up the cars_tab.txt file directly using Notepad, Wordpad, TextEdit or similar on your computer, you would notice that this file has a extra row of invalid data in it. This type of situation often occurs when the text file is created from another data source.

Fortunately, SAS provides an option that you can add to your PROC IMPORT statement to skip this extra line of data that you don’t need. By adding the datarow option, you can let SAS know at which row the data (observations) start. In this case, we know that the first row has the headings, the second row has no data, and the observations start on the third row, so we set datarow = 3:

​In the output data shown partially below, you will see that extra row has now been removed: 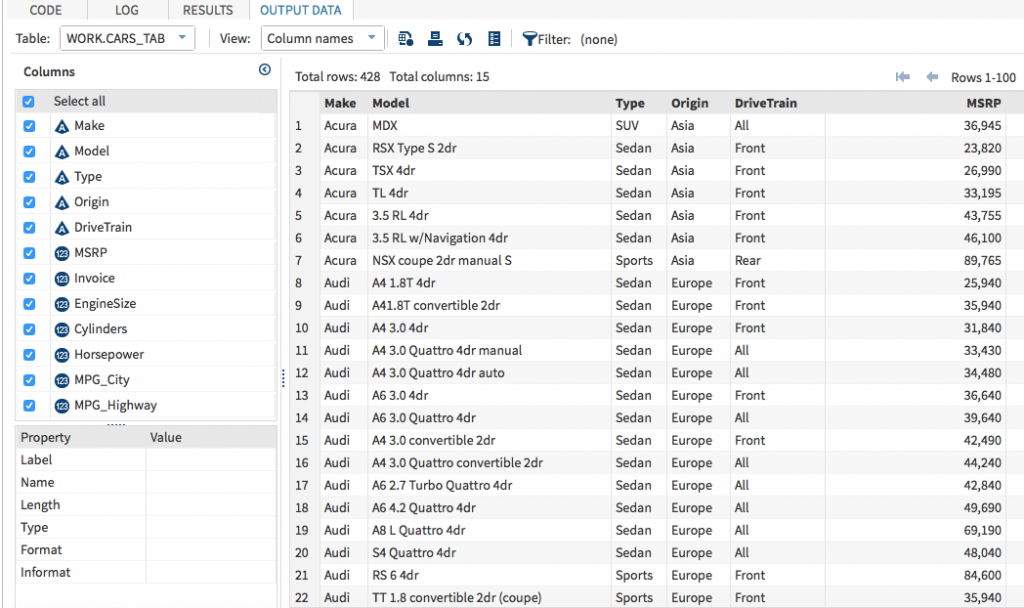 Do you have a hard time learning SAS?

Take our Practical SAS Training Course for Absolute Beginners and learn how to write your first SAS program!

Since text files can contain any number of special characters as delimiters, the DELIMITER statement be used with just about any keyboard character.

For example, if the values of a text file are delimited with the pipe bar “|”, you can simply specify the pipe bar symbol in the DELIMITER statement, similar to how we used ‘09’x for tab-delimited files. In this example, the cars_pipe.txt file is read in to create the CARS_PIPE SAS dataset in the WORK library:

After updating the path in the datafile statement and running the above code, you will notice that while the columns have been read in correctly, the variable names are not correct and actual values are being used as the variable names: 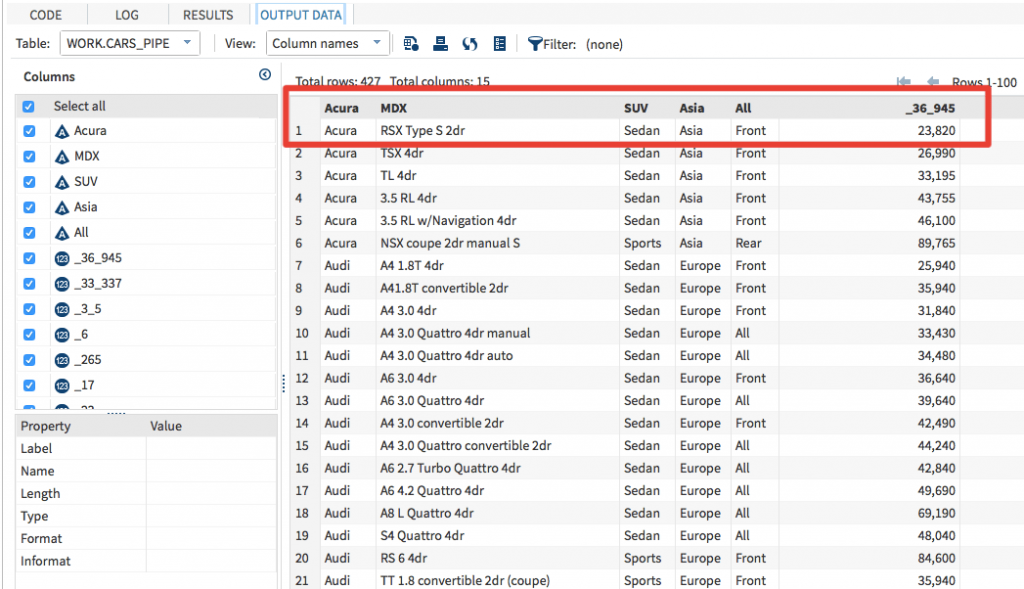 If you were to open up the cars_pipe.txt file directly using Notepad, Wordpad, TextEdit or similar text editors on your computer, you would notice that this text file has no column headings and the data starts directly in the first row.

​Now in the output data, all the records will be found in the dataset itself, but the heading names will have generic names from VAR1 up to VAR15 in this case, since there are 15 columns: 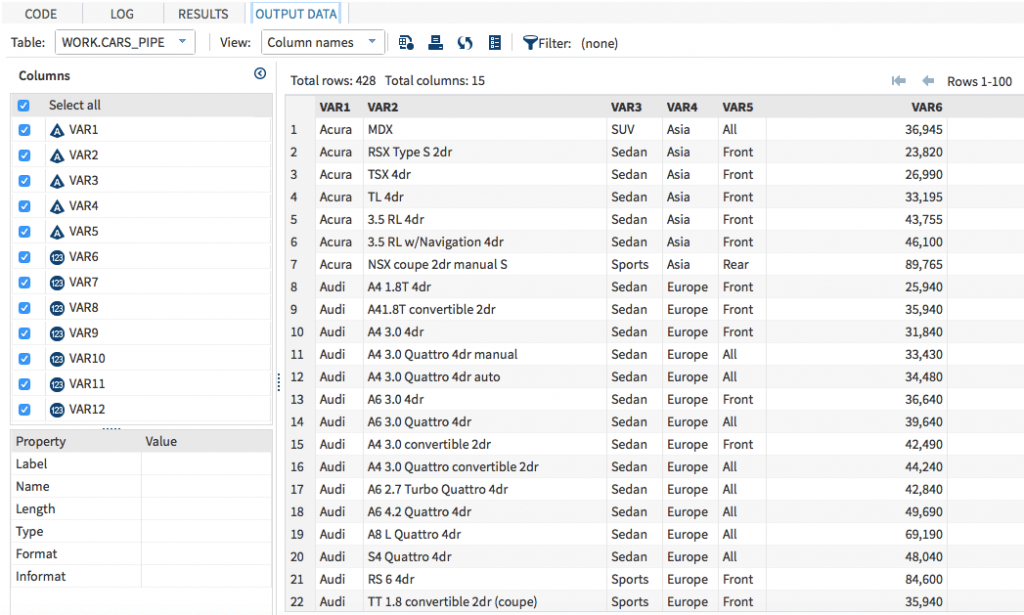 To fix the variable names, you could for example use the SAS Data Step with the RENAME statement to create a new dataset. As an example, the following dataset code would create a dataset called CARS_PIPE_CLEAN, which uses the RANEM statement to set the appropriate variable names as shown here:

Space-delimited text files are yet another common file type you may encounter that you would like to import into SAS. By default, setting DBMS = DLM with your PROC IMPORT statement will use space as the delimiter, so you don’t need to explicitly use the delimiter option in this case.

For example, the orsales_space.txt text file contains space-delimited columns, and can be imported into SAS with DBMS = DLM: 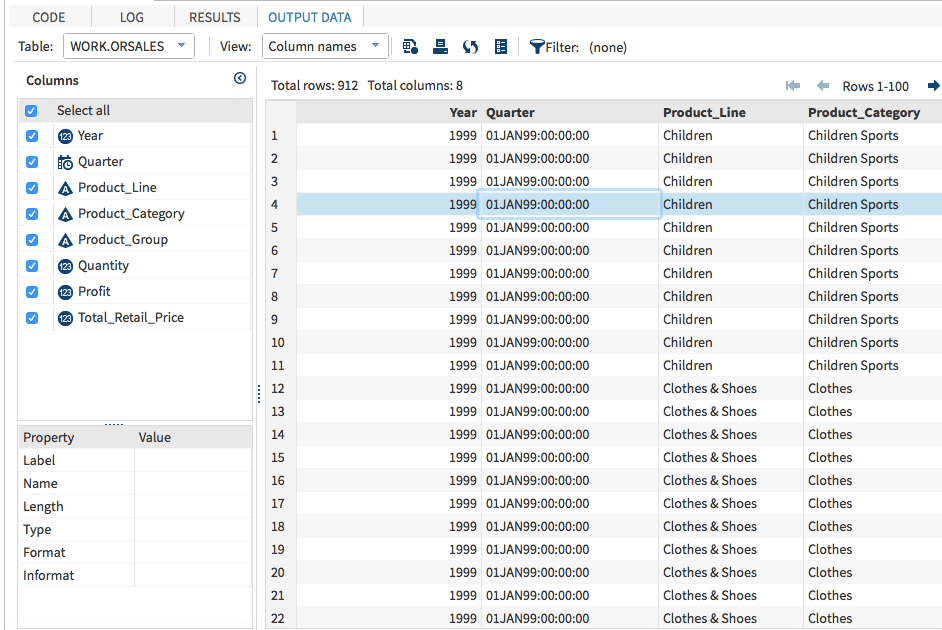 ​However, if you run a PROC FREQ (code provide below) on the Product_Line variable, you will discover that one of the values for Product_Category is truncated: 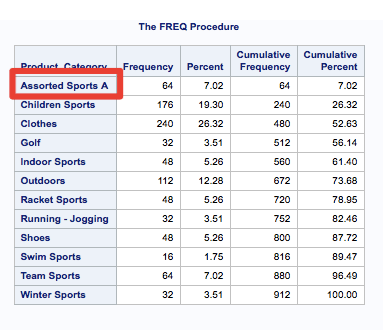 This type of situation can often occur when importing datasets into SAS because PROC IMPORT will only check a portion of the records before determining what the appropriate variable type and lengths should be on the output SAS dataset.

The solution to this problem is to include the GUESSINGROWS option with your PROC IMPORT call. By specifying a number for GUESSINGROWS, you can tell SAS how many rows it should scan in your incoming dataset before determining what the appropriate length and variable types should be.

In this example import, there are 912 rows of data. Here, by setting GUESSINGROWS = 912 we can be certain that SAS will pick the largest width necessary to avoid truncation of any data when it completes the import. A new dataset, ORSALES_GUESSINGROWS, is then created so you can see the difference in results:

By running a PROC FREQ to generate a frequency table on the newly created dataset, we can test whether or not the GUESSINGROWS option was effective:

As you can see from the output, the Product_Category value “Assorted Sports Articles” now shows up correctly and is no longer truncated:​

It’s important to note that GUESSINGROWS can be extremely computationally intensive and may significantly slow down the time it takes to import your dataset to SAS. The larger the value you set for GUESSINGROWS, the longer the processing will take, but more reliable the results will be. The run time will of course depend on your environment, the number of records and the number of variables found in your data.​

By using Data Step code, the variable names, lengths and types can be manually specified at the time of import. The advantage is that this allows you to format the dataset exactly the way you desire as soon as it is created in SAS, rather than having to make additional modifications later on.

First, as with any SAS Data Step code, you need to specify the name and location for the dataset you are going to create. Here, a dataset named CARS_DATASTEP will be created in the WORK directory.

After the INFILE statement, the simplest way to ensure that your variable names, lengths, types and formats are specified correctly is to use a format statement for each variable. After an appropriate format has been assigned to each variable, the variables that you would like to import should be listed in order after an INPUT statement. Note that character variables should have a dollar sign ($) after each variable name.

Note that you can also specify INFORMATs and LENGTHs optionally here, but in most cases the FORMAT and INPUT statements should be all you need for a successful import.

After running the above code, you should see the CARS_DATASTEP_TAB data set, shown partially here:​ 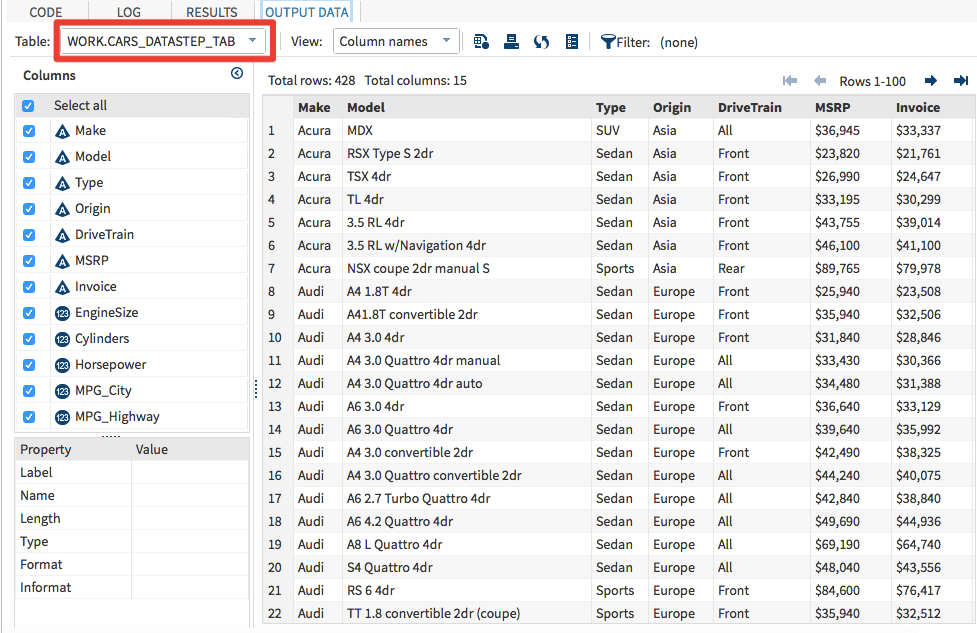 When the variable names, types, lengths or formats that SAS is automatically generating with PROC IMPORT are not what you are looking for, and you don’t want to type out 40+ lines of code as in the previous example, PROC IMPORT can still be a time-saving tool.

Going back to the cars_pipe.txt text file, recall that this text file did not contain column headings.

Re-run the following code to import cars_pipe.txt into SAS and create a temporary dataset, CARS_PIPE to be stored in WORK:

After running the above code, go to the Log that is created and notice that SAS Data Step code is actually being generated as a result of the PROC IMPORT: 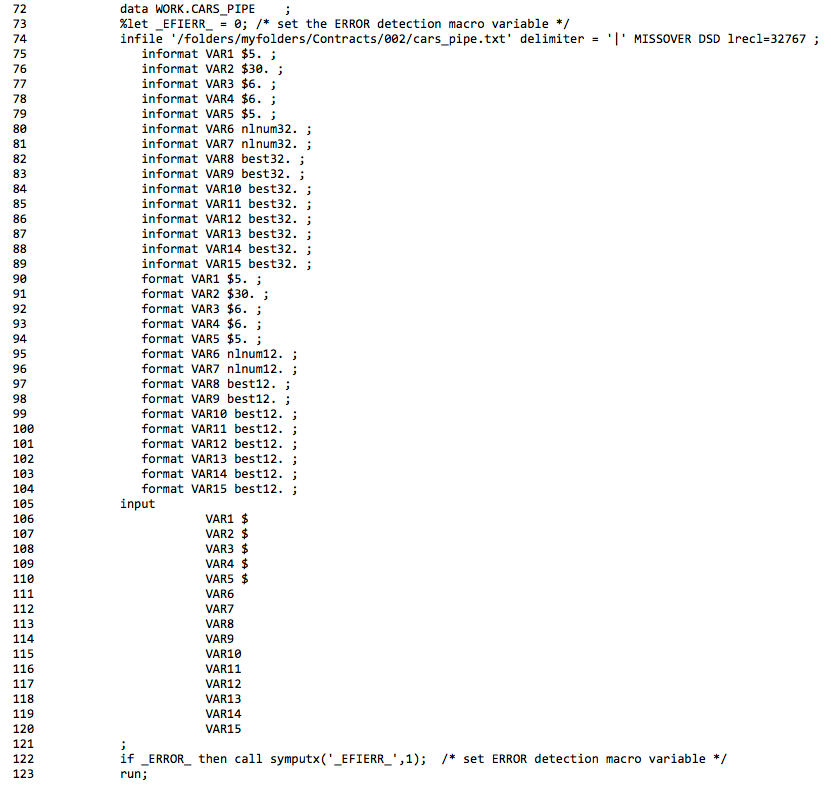 By simply copying and pasting this code from your log into your SAS program, you can now use this code as a template to start your Data Step code, modifying it as needed to adjust variable names, types and lengths.

​After running the above code, a new dataset WORK.CARS_PIPE_CUSTOM is created by importing the cars_pipe.txt text file using the SAS Data Step code we generated using PROC IMPORT.

Get latest articles from SASCrunch 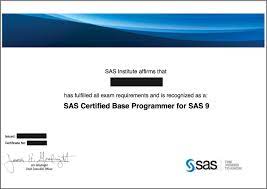 We use cookies on our website to give you the most relevant experience by remembering your preferences and repeat visits. By clicking “Accept”, you consent to the use of ALL the cookies.
Do not sell my personal information.
Cookie SettingsAccept
Manage consent

This website uses cookies to improve your experience while you navigate through the website. Out of these, the cookies that are categorized as necessary are stored on your browser as they are essential for the working of basic functionalities of the website. We also use third-party cookies that help us analyze and understand how you use this website. These cookies will be stored in your browser only with your consent. You also have the option to opt-out of these cookies. But opting out of some of these cookies may affect your browsing experience.
Necessary Always Enabled
Necessary cookies are absolutely essential for the website to function properly. These cookies ensure basic functionalities and security features of the website, anonymously.
Functional
Functional cookies help to perform certain functionalities like sharing the content of the website on social media platforms, collect feedbacks, and other third-party features.
Performance
Performance cookies are used to understand and analyze the key performance indexes of the website which helps in delivering a better user experience for the visitors.
Analytics
Analytical cookies are used to understand how visitors interact with the website. These cookies help provide information on metrics the number of visitors, bounce rate, traffic source, etc.
Advertisement
Advertisement cookies are used to provide visitors with relevant ads and marketing campaigns. These cookies track visitors across websites and collect information to provide customized ads.
Others
Other uncategorized cookies are those that are being analyzed and have not been classified into a category as yet.
SAVE & ACCEPT
wpDiscuz
X